Los Lunas, NM – State Police are searching for suspected car thief Jesus Xavier Jimenez, 40, of Albuquerque, who escaped custody while being booked at the State Police office in Los Lunas.

The investigation began on August 15, at around 2:00 p.m. when a New Mexico State Police officer on patrol initiated a traffic stop on 1998 white Dodge pickup that was reported stolen.   The driver of that vehicle, Jesus Xavier Jimenez was subsequently taken into custody without incident and arrested for possession of a stolen vehicle.

Jimenez was transported to the New Mexico State Police office in Los Lunas, located at 660 Main St SW for booking. Jimenez was placed in the holding cell while the officer completed the booking paperwork.  At some point during the process, Jimenez was able to get out of the holding cell and leave the building.

Jesus Xavier Jimenez is described as 5’7” tall, weighing 165 lbs., with brown eyes and brown hair. He was wearing a hat with glasses, a t-shirt, and blue jeans.  His direction and method of travel are not known.  State Police does not believe there is an active threat to the community.

How Jimenez escaped the holding cell and evaded officers is still under investigation.  Anyone with information on the whereabouts of Jesus Xavier Jimenez is asked to call the New Mexico State Police at (505) 841-9265, option 1, or dial 911. 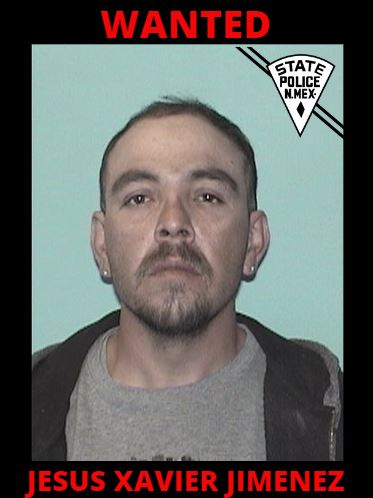