The investigation began on July 26, 2022, at around 2:30 p.m., when the New Mexico State Police were alerted by the United States Marshals Service that they had reason to believe Rentz was in the area. He was driving a 2005 black Chevrolet passenger car with a Utah license plate of 7R8ST.  State police officers on patrol saw Rentz in the vehicle near the area of East Broadway and Scott Avenue in Farmington.

Officers initiated a traffic stop, but Rentz drove away, and a pursuit ensued. Rentz tried to get away from officers by driving recklessly at speeds of over 100 mph.  On Navajo Route 36, near milepost 20 state police officers successfully performed a Pursuit Intervention Technique (PIT) on the vehicle, and Rentz was taken into custody.

For information on the warrants in Colorado, please contact the Montezuma County Sheriff’s Office in Cortez, Colorado. 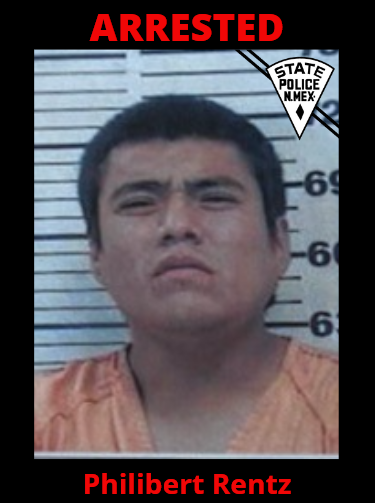