Regin Gutierrez has been located and is safe. 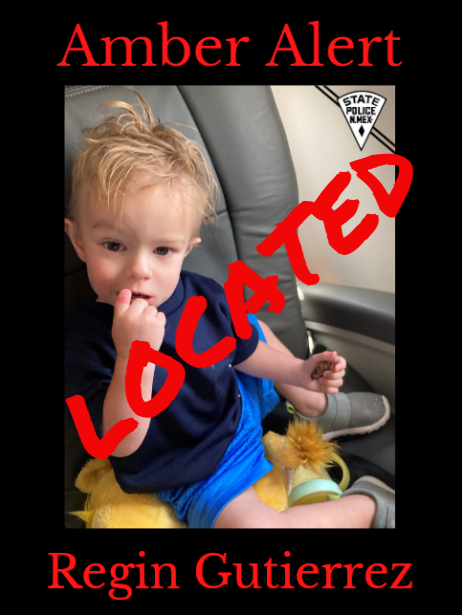 Albuquerque, NM – The following is information for the distribution of an Amber Alert from the New Mexico State Police.

The New Mexico State Police is asking the publics assistance in locating Regin Gutierrez, a one-year-old male infant. He was taken by force by his mother’s  boyfriend, Jody Ellis.  They are traveling in a mid-2000 white Chevy Avalanche with a Texas license plate of NPC9678.  Their direction of travel and destination is not known.

Regin is described as two feet tall, weighing approximately twenty pounds, with blonde hair and hazel eyes. He was last seen wearing a black Johnny Cash t-shirt and a diaper.  Jody Ellis, 35, is described as 5’9” tall, weighing 180 pounds with brown eyes and brown hair.  His clothing description is not known.

Many details are still unknown and under investigation.  However, of urgent concern is the whereabouts of Regin Gutierrez.